Top 3 Reasons Why We Need More Women in Engineering 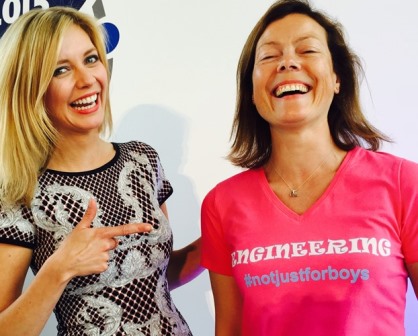 It’s a well-rehearsed script by now, but as it’s National Women in Engineering Day it’s well worth running through once again the top three reasons that it is so crucial that we up the numbers and proportion of women in engineering – from the nine per cent of the sector’s workforce women comprise at present to as close to half of it as possible.

One – we have an almighty skills shortage, it is well documented that we need some 830,000 science, engineering and technology (SET) professionals and 800,000 STEM graduates by 2020 to meet employer demand.

Two – broadening the talent pool would inject creativity and new ideas into an engineering sector which relies on those things to remain world-leading.

Three – we cannot afford, as a country, to waste the potential of girls who might be inclined towards a STEM career. If we increased the number of women in STEM to match the number of men it’d be worth some £2bn per year to the UK economy – that is not an inconsequential sum of money which could be used to build the schools and hospitals we all rely upon.

If it’s such an obvious ‘win’ to boost the numbers of women in STEM, you might ask, why is it not happening already? What are the factors keeping women out of STEM industries, and what can stakeholders – employers, industry bodies like Enginuity , government – do to address the situation?

Last year, the IET asked 100 women why they did not become engineers. More than one in ten said they didn’t feel they had the skillset or weren’t ‘clever enough’. So we as a sector ought to be considering whether our entry requirements are too rigid – happily, some employers already make allowances for talented women who have the aptitude but lack the formal qualifications or experience.

Lack of information is a key reason, too. The Industry Apprentice Council’s annual report is set to be published next week and, on NWED 2016, I can reveal a concerning gender divide when it comes to awareness of the opportunities available in engineering. Just 31% of female respondents to the IAC’s survey of apprentices said they were fully aware of those opportunities, compared with 48% of males – and 12% of female respondents said they were completely unaware of the options open to them. We need to do far, far better at showing girls and women what they could achieve through a career in engineering. Through the STEM Exchange/Experience, Enginuity is doing its bit, and the new ‘anti-snobbery’ careers advice law will hopefully improve the situation.

Finally, and most perniciously, there remains a general sense that engineering and STEM are ‘male’. More than half of girls think that if they pursued a STEM career they would have to work harder than males to be taken seriously, while take-up of STEM subjects at GCSE and A Level remains much lower for girls than boys. Strong role models are needed to prove to girls that they have a place in engineering and that it is not just for boys. There are so many great campaign groups, from the Women’s Engineering Society to WISE, but further action is needed within the sector – we need women on the boards of all companies, embedding cultural change and driving reform from the very top.

I long for the day when we don’t need things like National Women in Engineering Day, because there’s nothing holding women back from pursuing engineering careers and there’s no embedded gender divide in our sector. Until then, I and Enginuity will continue to champion NWED.