To celebrate the launch of National Apprenticeship Week 2017, we have a guest blog from Ann Watson, Chief Executive of Enginuity

I’m delighted, as the head of the organisation championing skills in advanced manufacturing and engineering, to lend my support to National Apprenticeship Week. But the truth is that in the sectors that Enginuity represents, we don’t just have one week a year dedicated to apprenticeships – they are a tried and tested route into an engineering career, with around a quarter of the sector’s workforce having undertaken one and board members at a number of our most famous household names having done so too. Employers in engineering go into schools and colleges all year round to promote apprenticeships as a strong and valued way into the sector, and they have so many programmes and initiatives up and running to show young people why they should start one.

An engineering apprentice can repay an employer’s investment in them within two years, and the knock-on effect of that is that an engineering apprentice could enjoy a career earnings boost of over £100,000 over someone who hasn’t undertaken one. Then there’s the debt issue – with universities set to be able to charge some students £13,000 a year in tuition fees, an engineering degree apprenticeship offers young people the chance to get the same degree, plus a whole load of invaluable work experience, while earning a salary and having their fees paid for them. What’s not to like about that?

Engineering apprenticeships are open to young people from all backgrounds. I will admit that our sector could sometimes do more to tell people that a career in engineering is for them. Our latest research report, Engineering Skills for the Future, outlines the messages we should be using to reach out to girls, and we hope to conduct similar research which looks at other under-represented groups in the future. I would say, though, that the situation is so much better now than it used to be – employers across our sector are absolutely committed to the diversity agenda, and they want to be able to make the best use of everybody in our society with a talent for engineering. My message to girls is this: If you have the skills, you have a great future ahead of you in engineering!

As a young person just starting out in your career, if you took up an engineering apprenticeship now you would be entering the sector at a very exciting time. Technology is being developed that will transform not just our sector, and not just the world of work, but our whole society and way of life. Engineers are going to be absolutely central to making that happen – they are already working on so much that really does need to be seen to be believed. Driverless cars and drone delivery would have been jaw-dropping ten years ago but they really are just at the very tip of today’s tech iceberg. 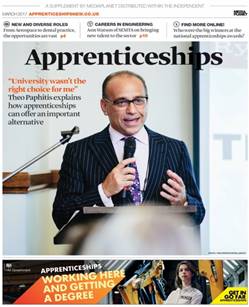